Fannie Mae Smith was the youngest daughter of James Thomas Smith and Sarah (Sanders) Smith.  Fannie was born November 16, 1900, at Select, .  They had one son, Eldred Taylor, who died at before 1963, and one daughter, Mildred Louise, who married John Phillip Bolton.  All are buried in , County, .   was the son of James Martin Taylor and Kitty Ann Leach.

Grandmother:  “Fannie Mae and Mildred came that Sunday and they stopped their car way down the street and Mildred came up to the door and knocked, and said…I hadn’t seen her in no telling how long.  But I had a picture of her, and she came to the door and she talked, and I recognized her.  And that sure did get her.  She thought she was going to have a lot of fun out of me.  She asked something, like selling magazines, or something…and she came to the door and we began to talk, and I looked at her and I knew I had seen her.  Of course, I hadn’t seen her in several years.  And I said, “Mildred.”  And she said, “Aunt Eva, how did you know me.”  (Laughter around the table).  “They were a lot of fun.  Fannie Mae was so jolly.”

GM:  “Yes, she was the life of the family.  And the baby.  Harb and Fannie Mae were close because they were the last two. Fannie married about two months before Harb, married.

“All the rest of them were married and gone.  Fannie Mae was always in a big way.  Fannie Mae always came in after her dates at night and told Ma and Pa all about them and she would give them a blow by blow description, and they just enjoyed it.  My dad was getting old, and they would sit down in front of that fireplace and talk and talk and laugh.  She was close to her mother and daddy and she wanted them to know what a good time she had.

“She married before Ella.  They stayed in for a long, long time before they came to .  She left a long time after I did.  Oh, I don’t know what year she came to .  And then his work called him to .  .  They first lived at , and they just followed that work.  I don’t know what…a contractor I think, and then he got called to SLC.  And they are still there.”

Mildred said they lived near Aunt Della – had a swinging gate between them.  Their folks would call out to them:  “Mildred Louise Taylor, Ruby Valois Taylor, and Evelyn Sanders Taylor.”

She said she always heard that when Grandma and Grandpa Smith got married, all they had was a barrel of molasses and that’s all.  She told the “hairpin” story about Grandma Smith.  And that she never fussed or said anything bad.  She always fixed Mildred what she liked to eat – big round biscuits, sugar-cured bacon, and fried corn.

Mildred said they left in 1940 and went to , and Dad worked in .  They went to and then transferred to .

Mildred said on a tape once that her dad was crippled and drove heavy equipment all his life – stayed with the Civil Service. She said her mother retired from Sears-Roebuck

Mrs. Fannie Mae Smith Taylor, 68, of Salt Lake City, Utah, died Monday, November 23, at a hospital.  She was a native of But had lived in for the past 20 years.

Mrs. Taylor was a member of Pleasant Hill United Methodist Church in Ohio County and a member of Chapter 294, Order of the Eastern Star at Cromwell.

Services were held at 2 p.m. Saturday, Nov. 30, at the William L. Danks Funeral Home, conducted by the Rev. Arnett Williams.  Burial was in the .

"Everett Presley Taylor 62, of Beaver Dam, died at 6:15 a.m. Tuesday.  He suffered a heart attack while in his car on the new Turnpike near Beaver Dam.

He was a native of .  He was a member of the Cromwell Masonic Lodge No. 692, and the Cromwell Order of Eastern Star, No. 294.  He had resided in for the past 20 years before returning to Beaver Dam. 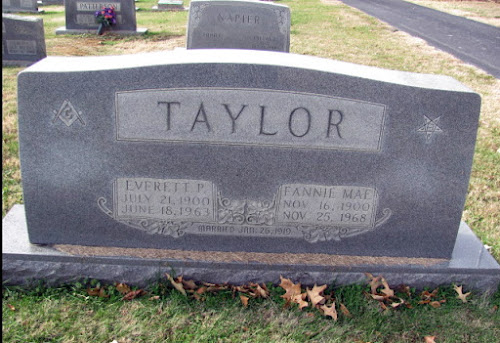 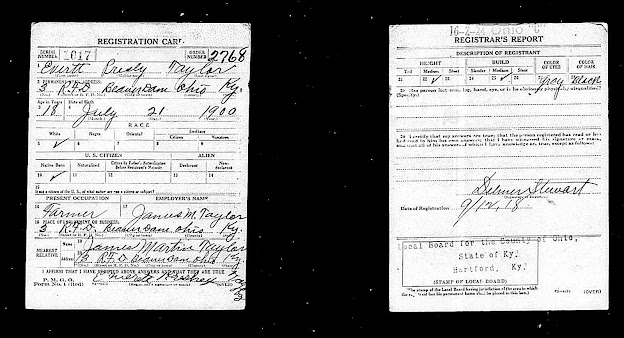 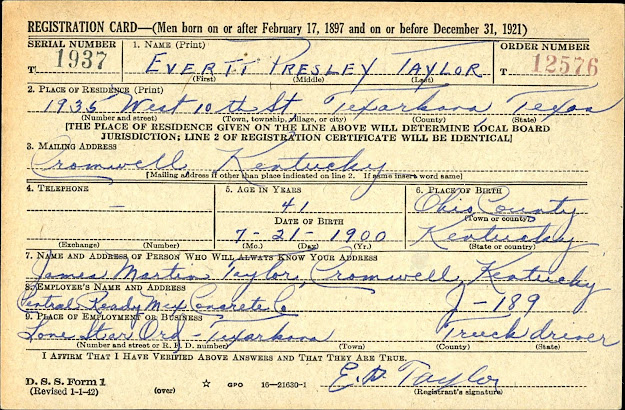 Thanks to Janice Brown.
Posted by Charles A. Leach at 7:14 AM

Email ThisBlogThis!Share to TwitterShare to FacebookShare to Pinterest
Labels: Smith