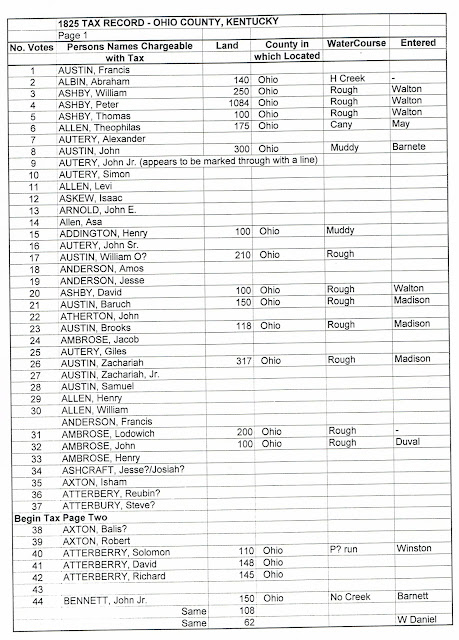 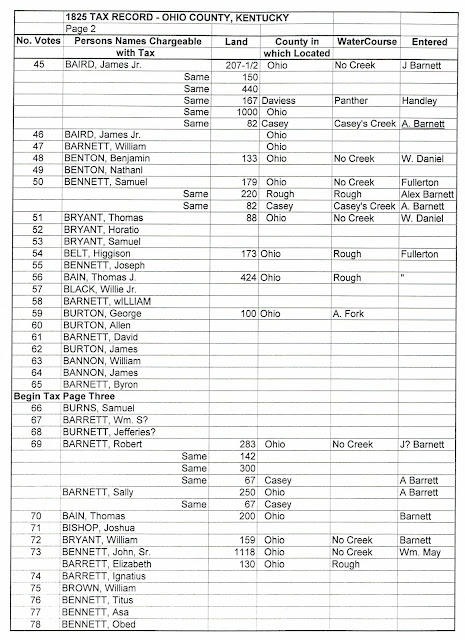 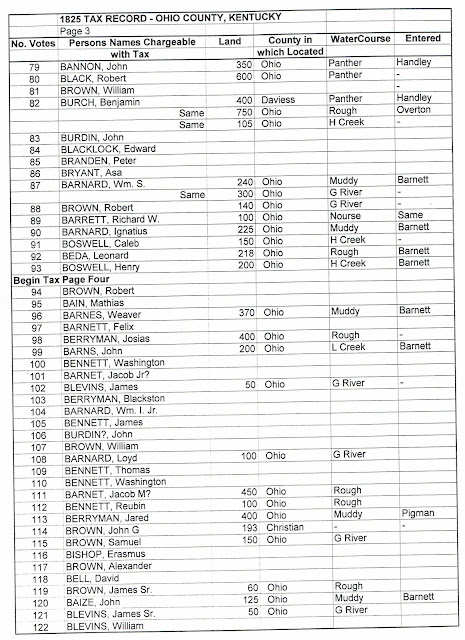 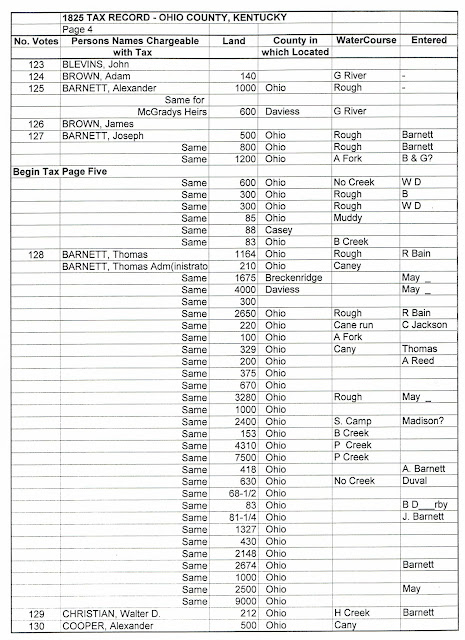 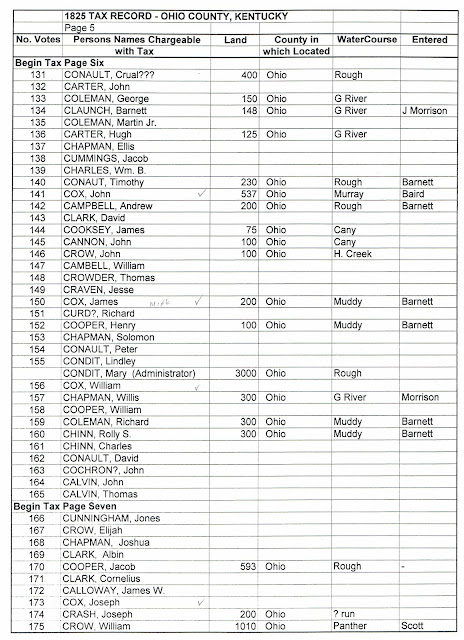 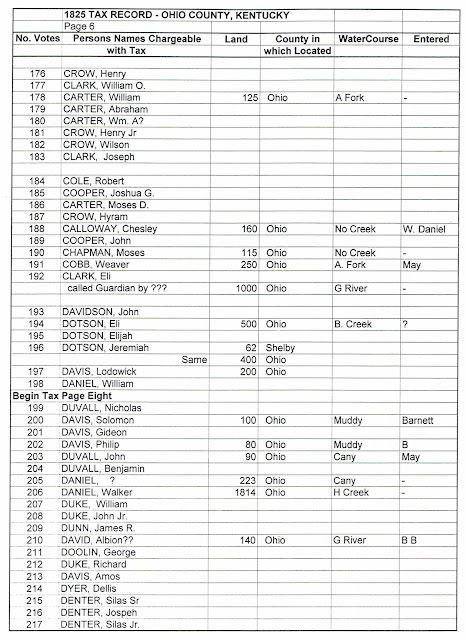 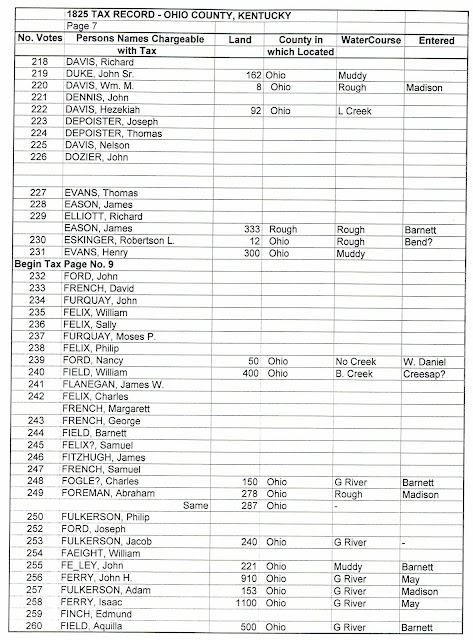 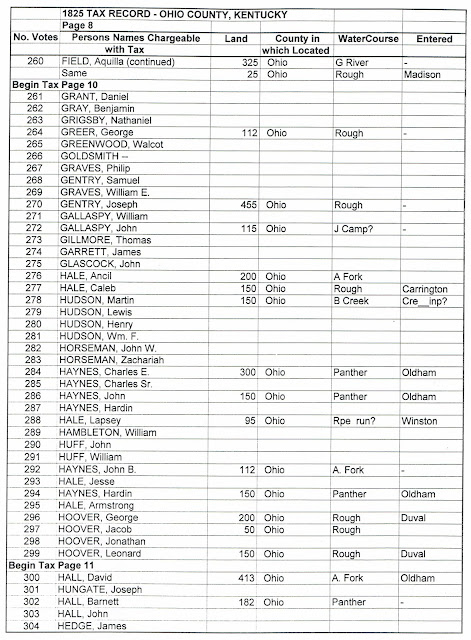 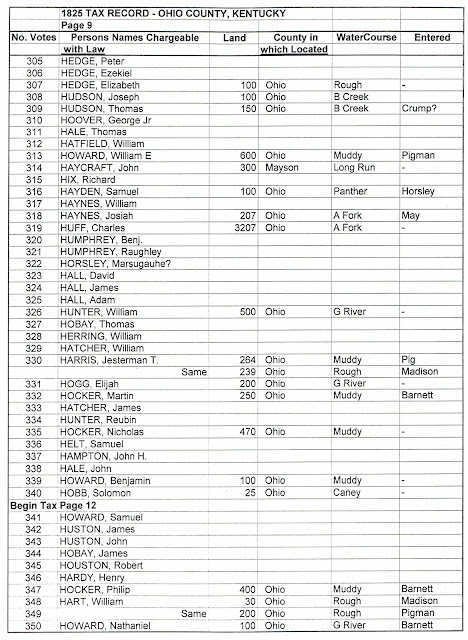 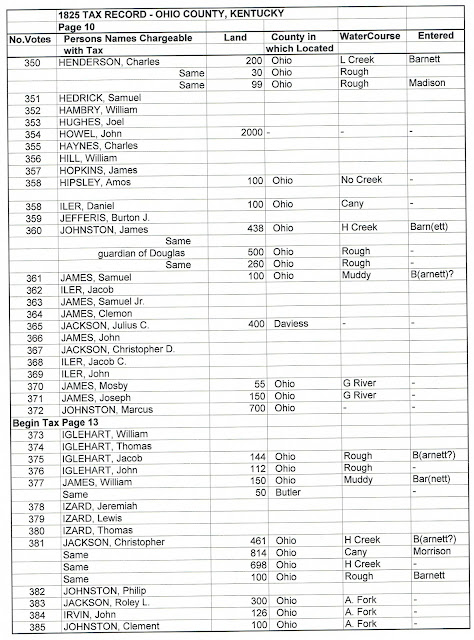 Posted by Charles A. Leach at 8:52 AM No comments:

ROBERT N. DUKE, Sulphur Springs, was born June 18, 1848, in Ohio County, Ky., where he grew to manhood and still resides, (for ancestral history see biography of W. H. Duke). Robert N. Duke was married, December 10, 1874, to Sarah C., daughter of Gabriel and Cordelia B. (Lashbrook) Acton, of Ohio County; she was born September 2, 1855, and to them were born one child, Geneva, deceased. Mr. Duke is a farmer, and has 105 acres of productive land in a high state of cultivation. He is in religion a Methodist, and in politics a Democrat.

Posted by Charles A. Leach at 4:00 PM No comments: 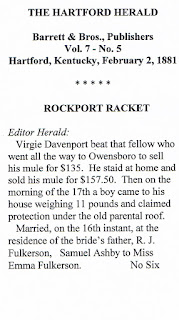 Posted by Charles A. Leach at 8:09 AM No comments:

Email ThisBlogThis!Share to TwitterShare to FacebookShare to Pinterest
Labels: News

WILLIAM HENRY DUKE, Ohio County, was born July 7, 1843, in Ohio County, Ky., where he has always resided. His father, William Duke, a native of Tennessee, was born in 1811, removed with his parents in youth to Ohio County, Ky.; was for many years an active Methodist, and died in 1870. He owned 644 acres of good land; he lost three slaves by the war. He was the son of Washington Duke, born near Blue Ridge, Va., and died about 1863, at the age of seventy seven years. William was married to Julia A., daughter of Matthew and Hannah (Sabine) Neely, of Ohio County, born August 23, 1815, in New York, reared in Warwick County, Ind. To them were born Mary E. (Berryman), Eliza E. (Moore), James N., Martha J. (Renfrow), William Henry, Jacob D., Robert N., Julia A. (Bean), Amelia J. (Mitchel), Thomas D., and Amanda Z. (Bean). December 25, 1864, William Henry married Josie A., daughter of Gabriel J. and Mary A. (Acton) Bean, of Ohio County; she was born August 17, 1845, and to them were born Venia P., Eva R. , Edessa G., Zelma L. (deceased), Annie J. (deceased), Foy D., Edgar F., Henry O., Mary B., and an infant daughter unnamed. Mr. Duke is a successful farmer, owning a farm of fine land in a good state of cultivation. He is a Methodist and a Democrat. 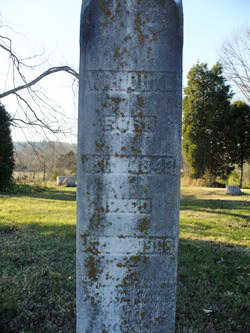 Posted by Charles A. Leach at 6:46 AM No comments:

Posted by Charles A. Leach at 4:59 PM No comments:

Email ThisBlogThis!Share to TwitterShare to FacebookShare to Pinterest
Labels: News

JOHN D. T. DUKE, a carpenter by trade, was born in Ohio County, Ky., January 17, 1835, and is a son of Thomas Duke, who still survives at the age of seventy-eight years. He also is a native of Ohio County, Ky., and was born March 17, 1807. His vocation in life has been that of a farmer. He married Elizabeth Taylor, of Ohio, Ky., who died April 18, 1836, leaving two children, Margaret and John D. T.  Afterward married Darcas Ann Addington, who died June 21, 1884, leaving eight children. John Duke, the grandfather of John D. T., was a native of Maryland, born in 1773. John D. T. Duke had but few advantages of early education, but by close application, has obtained a fair business education, and is quite an expert at the carpenter trade. At the age of twenty-one he began farming for himself. Rented land until 1866, when he bought thirty three acres of land from Henry Thomson. He afterward bought 108 acres of land from Q. C. Shanks and John Stevens, and fifty-two and one-half acres from Frederick Schroader. In 1880 he bought an interest in a saw-mill, and was engaged in the manufacturing of lumber for two years, when he sold his interest in the mill and went into the drug business, with A. V. Thomson, at Horton, Ohio Co., Ky. Mr. Duke has not inherited any part of his possessions, but has gained it all through his own exertions and close application to business. Mr. Duke still retains a state of single blessedness. Politically he is a stanch Democrat; a member of the Methodist Episcopal Church, in which he holds the office of trustee, and favors the cause of temperance by example and precept. 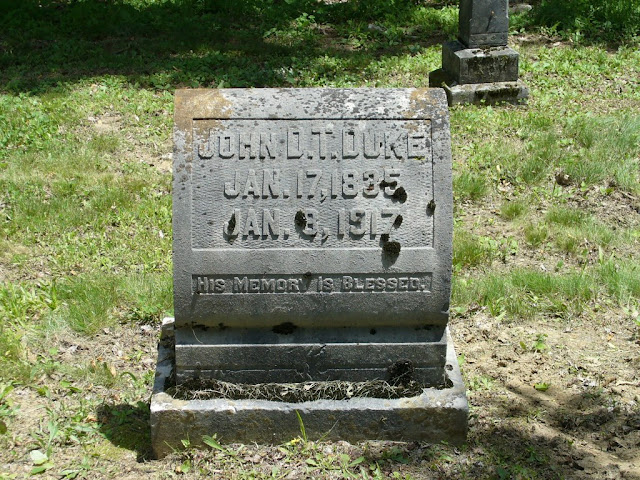 Posted by Charles A. Leach at 5:21 PM No comments:

Posted by Charles A. Leach at 7:24 AM No comments: