My oral history interviews with my grandmother are stories that she told me about her past, or about the past of other family members. To me, as a genealogist, it is important to preserve oral history from older members of the family, whose lives and their memories are at risk of being lost to time. Therefore, interviewing my grandmother, as well as my parents, was always a first priority of mine as a family historian to interview as many grandparents and great-grandparents, as possible – just little remembrances such as the story below.  My children and grandchildren love them!

From a tape recording interview made on Oct 10 1977 with my grandmother, Eva Caroline (Smith) Cox (1889-1988,) when she recalled various memories and the following story about her own grandmother Fidella (Porter) Sanders.  She wanted to spend the night with her grandparents who lived about two miles or less from her house.

Grandmother:  “Oh, I don’t know how old I was.  But I wanted to go over there and stay all night and they let me go.  And I don’t know…I just got so homesick…and I wanted to go home.  I had stayed one night.  And I thought, well, the next day I’ll go home, but I didn’t go.”

When the next night began to come on, oh, I got so homesick.  I began to cry.  I could hear them all hollering over there at home …and talking and laughing in the yard.  And I said I wanted to go home, and grandma said, “No, you can’t go tonight…cause we have no phone, and you might fall.  It’s too late, and there’s a big snow on.  I would never know if you got over there or not.”

“Well, I just set into squalling.  (Laughs.)  But I set to crying…and she finally give up…about dark.  And there was a big snow that night…up to your knees.  And it was nearly night time, and she couldn’t do nothing with me.  But I remember enough that she got a pair of grandpa’s wool socks and pulled them up over my shoes and fixed them where they wouldn’t fall down, and she let me go.  Laughing)  And there I went.  In the snow, walking.”

Jerri:  “What did your mother say when you got home?”

“And I come in, and Mother was so surprised.  All of them.  They had the lights on… lamps… and they hadn’t eaten their supper …they always ate late.  And grandpa eat early…about 4:30 in the wintertime.  So I had already had my supper.  And I really wanted to go home, and I was so happy when I got there.  There wasn’t any wind blowing.”

Grandmother:  “Probably was.  Probably larger.  But I was homesick.  And I wanted to go home.  I just would not stay that night.  I could hear their voices…hear them all talking, carrying in the wood, I guess.  I imagined everything.  And the more I listened, the more homesick I got.

And it wasn’t but a mile.  But they didn’t know.  I could have fell and froze to death.  And nobody wouldn’t have known it.  It’s the wonder my grandmother let me go, but I guess she thought she would have to sit up with me all night.”  (Laughing) 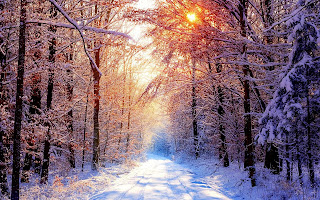 Old Sport –Guard Dog
Of
Charles and Fidella Sanders,
Grandparents of Eva (Smith) Cox,
Who lived at Select, Ohio Co. KY about two miles
from my grandmother when she was a little girl.

Grandmother:  “Yes, and one time, her dog bit me.  Old Sport.  I went over there, and in place of going to the door, I went around and thought I would miss him, and he was in the chimney corner, by the chimney, and when I turned the corner he grabbed me.  And I mean he bit the blood out of me.  My grandmother, Fidella Sanders, came running and taken me in the house.  And in that day and time, they had nothing but turpentine, and she put that on that sore, on the place where that dog had bit me.”

Jerri:  “Was he bad about biting?”

Grandmother:  “Yes.  We all knew that.  He was a guard dog.  He was a great big old black wooly dog….with a little white on him.  He was a pretty good sized dog, too.”

Grandmother:  “No, I was glad when he died.  (Laughter)  Well, I really was.  I never did like that dog.  (Laughter from those around her dining room table, who were listening to her stories.)  Now they were really proud of that dog, and they were old and it guarded them, and they loved him.  But I didn’t like that dog.”

Email ThisBlogThis!Share to TwitterShare to FacebookShare to Pinterest
Labels: Cox